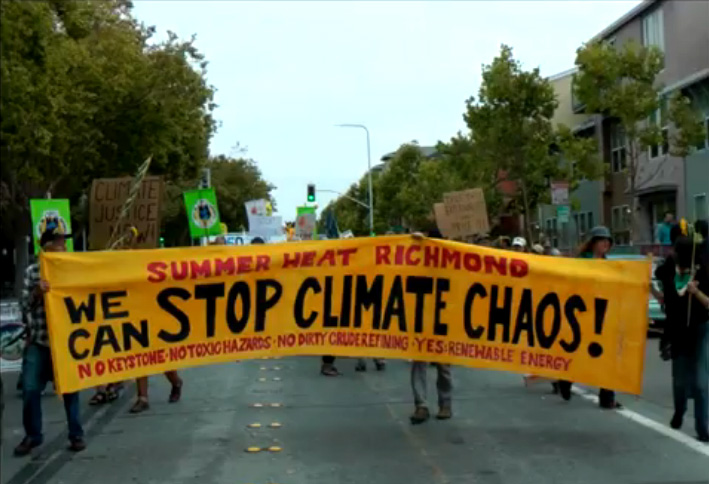 Published on YouTube Aug 6, 2013: RICHMOND — More than 2,000 people marched Saturday through the streets of Richmond to the gates of the Chevron refinery, where 210 people were arrested as part of a protest against the oil giant and other fossil fuel companies.

Chanting “arrest Chevron,” protesters sat in front of the refinery gates before being handcuffed by police in riot gear. The event was scheduled to mark the anniversary of the Aug. 6 explosion and fire at the refinery that generated a huge plume of black smoke and sent 15,000 people to hospitals complaining of breathing problems. The showdown was about more than one local community’s battle with its largest employer and biggest polluter, however. It represents the latest example of a fast-growing movement by environmentalists across the United States to organize rallies, marches and civil disobedience for more action to reduce greenhouse emissions

“The pace is picking up very dramatically,” said Bill McKibben, one of the event organizers.

McKibben is a Vermont writer who cofounded the nonprofit group 350.org, which has organized thousands of similar events in the past five years. He was among the first people arrested Saturday. McKibben said protests are increasing because people are frustrated that Congress has not passed national laws to reduce greenhouse gas emissions from the coal, oil and other fossil fuel industries despite overwhelming scientific evidence that the planet is warming.

http://350.org where we are changing the odds Come Join US!