The rise of digital currency like Bitcoin, and carbon footprints 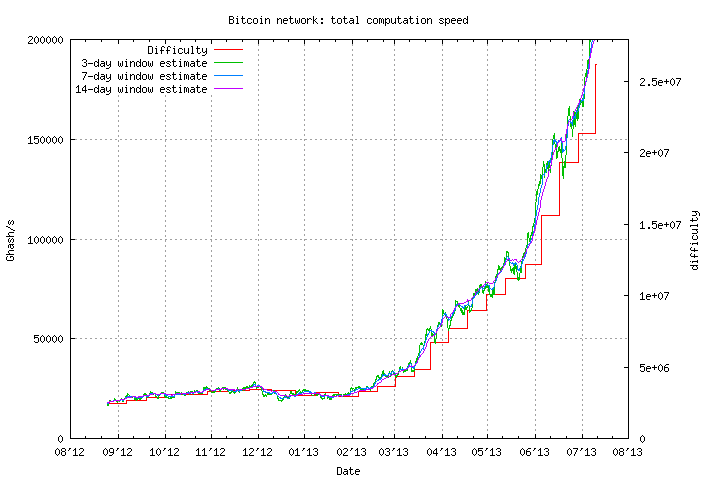 We have just observed a significant step up in the difficulty of Bitcoin hashes. This has come after a sharp rise in the total number of hashes per second on the Bitcoin network. Over the past 24 hours the hash rate has jumped from 127701 GH/s to 148527GH/s, according to Blockchain.info. This is one of the fastest and biggest changes in the history of the bitcoin protocol and demonstrates a continuing exponential growth in not just the difficulty of the proof-of-work calculations, but in the computing power being brought to bear on generating the currency.

According to blockexplorer.com, the current difficulty of computing bitcoin blocks is rated at 15605632.681286. Around this time last year, the figure was approximately 13478. Which shows a 1158% YoY growth, and a 495% QoQ growth in difficulty.

From that article comment section, Dimitrije Badnjarević notes: “Eventually the whole network will be pure ASIC units and similar because of their hashrate/consumption ratio.”

What does this mean?

Since the top notch GPU’s (Graphics processing unit / graphic card) are less optimized to compute hashes and consume a lot power in the process, which causes considerable electricity bill’s, the new generation of Bitcoin miner is switching to ASIC (Application-specific integrated circuit) and possibly similar hardware.

Asicminer’s Block Erupter Blade: ASIC-Powered Efficiency Each blade consists of 32 hashing chips. It has the baseline speed of 10 GHash/s, the rated speed of 10.752 GHash/s, and the maximum speed of 12.829 GHash/s with overclocking and proper cooling. The power consumption is 83Watts per blade in room temperature on rated clock and voltage.

From above linked list, if we compare ATI Radeon HD 7990 GPU, this model consumes 555 watt of power and runs 1200 MHash/s. That means that the ASIC architecture example “Block Erupter Blade”, is roughly 60 times more energy efficient than one of the best GPU’s.

The new (2013 introduced) ASIC architecture is roughly 60 times more energy efficient than one of the best GPU’s. Hence, ASIC miners are used today to farm Bitoin, powered with the USB port.

Nate Anderson of Wired blogged in April 2013, titled “Mining bitcoins takes power, but it isn’t an ‘environmental disaster‘”: Tim Worstall says the energy being used is “simply trivial,” amounting to 0.025 percent of the total US household electricity supply. And worldwide, that percentage would be far lower. Besides, Worstall says, “at some point Bitcoin mining will stop. There is an upper limit to the number that can ever be mined; I think I’m right in saying that we’re about halfway there at present. Thus this energy consumption will not go on rising forever. At some point it will come to a dead stop in fact.” (The system is self-limiting, with a max of 21 million bitcoins.)

Once the upper limit of mined Bitcoin’s is reached, energy consumption is likely to fall and then it is just a matter of powering a computer device to run Bitcoin transactions or to follow the digital currency market. Virtual currency basically just requires a certain amount of electricity, which can be entirely generated from solar or wind power.

When it comes to emissions – digital currency does provide a way to lower our carbon footprints. Though, miner’s should use electricity generated by renewable energy sources to bring down carbon foot prints and to save money.