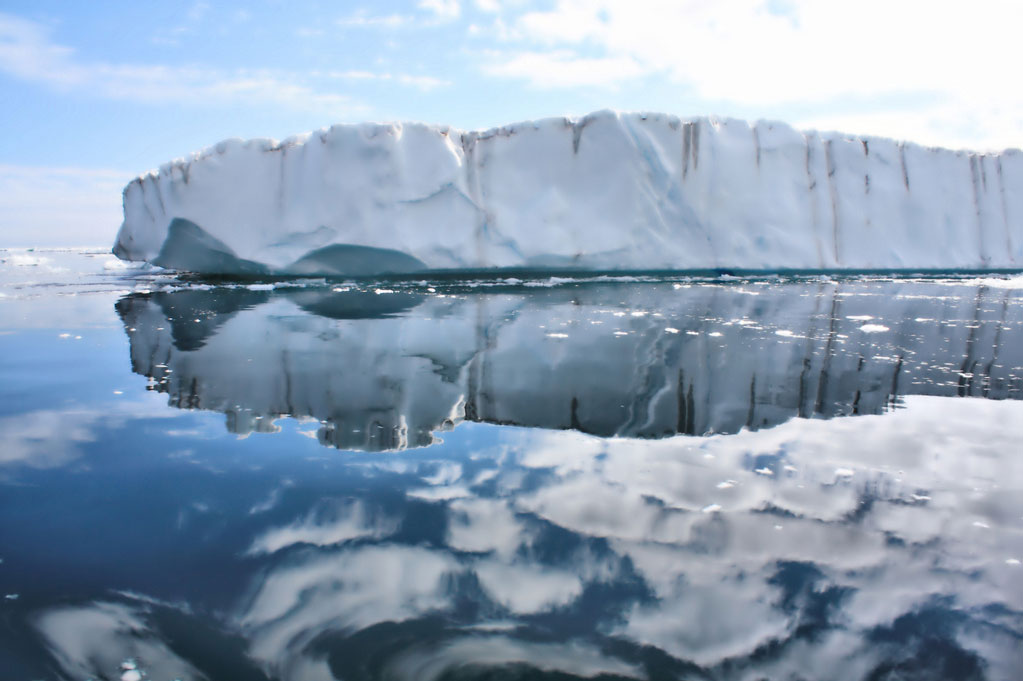 What is an ice shelf?

Ice shelves are floating tongues of ice that extend from grounded glaciers on land. Snow falls on glaciers, which flow downstream under gravity. Ice shelves are common around Antarctica, and the largest ones are the Ronne-Filchner, Ross and McMurdo Ice Shelves.

In the satellite image of Prince Gustav Ice Shelf below, you can see that the ice shelves have a very flat appearance. In fact, you can normally tell where the ice starts to float by a sharp break in slope at the grounding line. Ice shelves are therefore composed of ice derived from snowfall on land, but they also accrete marine ice from below[1]. Ice shelves are therefore distinct from sea ice, which form solely from freezing marine water. You can see an example from northern Antarctic Peninsula below. Prince Gustav Ice Shelf ws situated between Trinity Peninsula and James Ross Island. It collapsed in 1995. You can see glaciological structures on the ice shelf, indicating that it flows out from its tributary glaciers. You can also see abundant melt ponds on the ice shelf.

Ice shelves around Antarctica are up to 50,000 km2 in size, and can be up to 2000 m thick. Their front terminus is often up to 100 m high. Ice shelves intermittently calve large icebergs, which is a normal part of their ablation. Around Antarctica, ice shelves from where mean annual temperatures are less than -9°C, with sequential break up of ice shelves as temperatures increase[2-4]. The geometry of the coastline is often important for determining where ice shelves will develop. The Larsen Ice Shelf, for example, is formed in an embayment.

Several of the ice shelves around Antarctica have recently collapsed dramatically, rather than retreating in a slow and steady manner. Larsen A collapsed in 1995[5], and Larsen B Ice Shelf famously collapsed in 2002. It has shrunk from 12,000 km2 in 1963 to 2400 km2 in 2010[3]. During February 2002, 3250 km2 were lost through iceberg calving and fragmentation. In the figure below, you can see the blue, mottled appearance of the ice shelf in the 2002 image, caused by the exposure of deeper blue glacier ice.

Several ice shelves have now collapsed around the Antarctic Peninsula (Table 1). Their collapse has made it possible to core the sub-shelf sediments to investigate whether these collapses are part of normal ice-shelf behaviour. It appears that the more northerly ice shelves, such as Prince Gustav Ice Shelf, have indeed previously collapsed, resulting in open-marine organisms living in Prince Gustav Channel for a short period 5000 years ago[6]. However, the more southerly Larsen B Ice Shelf appears to have remained a fixture throughout the Holocene[7]. This suggests that certain thresholds have been passed, with environmental changes throughout the Antarctic Peninsula now surpassing any that have occurred before.

In the video below, you can see an animation of the Larsen Ice Shelf collapse from Modis imagery:

There are several theories for why ice shelves appear to disintegrate rapidly rather than slowly and steadily shrinking. It appears that ice shelves collapse in response to long term environmental changes, with on-going thinning and shrinking. When certain thresholds are passed, catastrophic ice shelf disintegration through iceberg calving is imitated.

Long-term thinning from surface and basal melting preconditions the ice shelf to collapse. Negative mass balances on tributary glaciers can lead to thinning of the glaciers and ice shelves. The highest rates of thinning are where relatively warm ocean currents can access the base of ice shelves through deep troughs[8, 9]. Ice-shelf structure seems to be important, with sutures between tributary glaciers resulting in weaker areas of thinner ice, which are susceptible to rifting[10].

Increased atmospheric temperatures lead to surface melting and ponding on the ice surface. Catastrophic ice-shelf collapsed tend to occur after a relatively warm summer season, with increased surface melting[11]. Based on the seasonality of ice shelf break up, and the geographic distribution of ice shelf collapse near the southerly-progressing -9°C isotherm, it appears that surface ponding is necessary for ice-shelf collapse[11]. This meltwater melts downwards into the ice shelf, causing fractures and leading to rapid ice-berg calving[4, 11]. Increased surface meltwater also leads to snow saturation, filling crevasses with water and increasing hydrostatic pressures. Brine infiltration can also cause crack over deepening.

However, this does not explain rapid ice-shelf fragmentation. There are several theories. Bending at the frontal margin of the ice shelf as a result of tidal flexure may cause small cracks to form parallel to the ice front. When subject to the above conditions (thinning with abundant surface water), a threshold may be passed, causing rapid ice shelf disintegration[11].

When icebergs are formed through the above mechanisms, long, thin icebergs are formed at the ice front. These icebergs will capsize as they are thinner than they are deep. Iceberg capsize releases gravitational potential energy and increases tensile stress on the ice shelf. This may lead to a cascade of fragmentation, capsize, and iceberg break up[12].

Glacier-ice shelf interactions: In a stable glacier-ice shelf system, the glacier’s downhill movement is offset by the buoyant force of the water on the front of the shelf. Warmer temperatures destabilize this system by lubricating the glacier’s base and creating melt ponds that eventually carve through the shelf. Once the ice shelf retreats to the grounding line, the buoyant force that used to offset glacier flow becomes negligible, and the glacier picks up speed on its way to the sea. Original Image by Ted Scambos and Michon Scott, National Snow and Ice Data Center.

Collapsing ice shelves do not directly contribute to global sea level rise. This is because they are floating, and so their melting does not result in sea level rise. To check this, put a few ice cubes in a glass and check the water level. Does the water rise when the “icebergs” melt?

However, ice shelves play a very important role in “buttressing” their tributary glaciers. Glaciers that feed into ice shelves are held back by the ice shelf in front of them[13, 14]. Even small ice shelves play an important role in regulating flow from ice streams that feed into them[13]. This has been observed in several cases, most notably following the Larsen Ice Shelf [15-18] and Prince Gustav Ice Shelf collapses[19, 20].In the Landsat image of Prince Gustav Ice Shelf above, you can see the rapid glacier recession from 1988 to 2009.

With glaciers thinning, accelerating and receding in response to ice shelf collapse[19, 20], more ice is directly transported into the oceans, making a direct contribution to sea level rise. Sea level rise due to ice shelf collapse is as yet limited, but large ice shelves surrounding some of the major Antarctic glaciers could be at risk, and their collapse would result in a significant sea level rise contribution[21]. See Marine Ice Sheet Instability for more information.