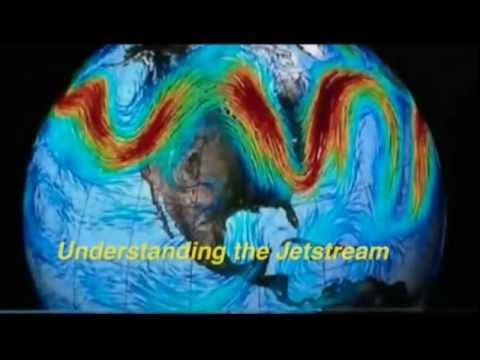 “The fuel for the more intense storms would be the predicted warming of the Earth caused by the burning of fossil fuels that release greenhouse gases.”

A combination of a slower Jet Stream (see video for explanation and study) and a more humid atmosphere increase the likelihood for a more intense thunderstorm environment. This conclusion can be drawn assessing the latest science on polar amplification / sea ice melt (Jet Stream modulation) and the studies we have already, in particular from NASA, NCAS & PIK. On top of this there are the Property Claims (see image), which give some kind of indication in regards to storm intensity.

Insured losses due to thunderstorms and tornadoes in the U.S. in 2012 dollars. Data and image from Property Claims Service, Munich Re.

“When a storm occurs today, it “can” be in a more favorable environment, could move slower thus become bigger.”

From 2007, USA Today: Although the typically stormy spring could see more storms, “summer should have the highest increases in severe weather,” says Trapp. His team reports that by the end of the century, the number of spring days with severe thunderstorm conditions would increase mostly over the southern plains and Florida. But in the summer, almost the entire eastern half of the country might see an increase in days conducive to more severe storms, with the largest increases likely near the Gulf of Mexico and the Atlantic coast.

The scientists found that as the temperature of Earth’s atmosphere rises, the warm, humid air that helps fuel powerful thunderstorms is also expected to increase throughout the USA.

Kevin Trenberth, a senior scientist with the National Center for Atmospheric Science in Boulder, Colo., who was not part of this study, says, “What they suggest here seems quite plausible.” But he adds that although a study such as this is overdue and welcome, it is not as definitive as he would like because of limitations in the climate models used in the study. However, “conditions may be even worse than depicted,” he says.

The new study is the second released this year that uncovered a link between severe thunderstorms and climate change. The first one, released by NASA researchers in August, forecast an increase in the intensity of severe storms throughout the year.

“I believe there is evidence that the strongest tornadoes are getting stronger. They are certainly getting longer and wider.”

-James B. Elsner, an atmospheric scientist at Florida State University 2013 after the Moore tornado.

Multiple scientific studies find that indeed the weather has become more extreme, as expected, and that it is extremely likely that humans are a contributing cause (see “Two seminal Nature papers join growing body of evidence that human emissions fuel extreme weather, flooding that harm humans and the environment”).

Beyond that, as Dr. Kevin Trenberth, former head of the Climate Analysis Section of the National Center for Atmospheric Research, explained here in 2010: “There is a systematic influence on all of these weather events now-a-days because of the fact that there is this extra water vapor lurking around in the atmosphere than there used to be say 30 years ago. It’s about a 4% extra amount, it invigorates the storms, it provides plenty of moisture for these storms.” He told the NY Times, “It’s not the right question to ask if this storm or that storm is due to global warming, or is it natural variability. Nowadays, there’s always an element of both.” + Trenberth elaborated on this in a must-read 2012 article, “How To Relate Climate Extremes to Climate Change.”

Munich Re, one of the world’s leading reinsurers, issued a news release in 2010, “large number of weather extremes as strong indication of climate change,” which noted:

Munich Re’s natural catastrophe database, the most comprehensive of its kind in the world, shows a marked increase in the number of weather-related events. For instance, globally there has been a more than threefold increase in loss-related floods since 1980 and more than double the number of windstorm natural catastrophes, with particularly heavy losses as a result of Atlantic hurricanes.

Then we have the study The Effect of Climate Change on Tornado Frequency and Magnitude:

There is an obvious increase in tornado frequency between 1950-1999. This could be due to increased detection. Also this could be due to changing climatic conditions. Looking at the raw data we have seen that there are generally less tornadoes in El Nino years compared to La Nina Years. But, since we were unable to get climate data, we were unable to see if the change in the frequency was due to climate factors.

Our data has failed to show a strong correlation in increase in tornado frequency and magnitude during El Nino and La Nina events.

The total number of U.S. tornadoes since 1950 has shown a substantial increase. Image credit: NOAA/NCDC

Jeff Masters / Wunderground: May 2013, after another shattering EF-5 tornado in Moore, Oklahoma, residents of the Midwest must be wondering, are we back to the 2011 pattern? Which of these extremes is climate change most likely to bring about? Is climate change already affecting these storms?

These are hugely important questions, but ones we don’t have good answers for. Climate change is significantly impacting the environment that storms form in, giving them more moisture and energy to draw upon, and altering large-scale jet stream patterns. We should expect that this will potentially cause major changes in tornadoes and severe thunderstorms.

Unfortunately, tornadoes and severe thunderstorms are the extreme weather phenomena we have the least understanding on with respect to climate change. We don’t have a good enough database to determine how tornadoes may have changed in recent decades, and our computer models are currently not able to tell us if tornadoes are more likely to increase or decrease in a future warmer climate.

And a recent study on extremes and atmospheric air flow, Potsdam Institute for Climate Impact Research (2013)

Weather extremes provoked by trapping of giant waves in the atmosphere

PIK: “An important part of the global air motion in the mid-latitudes of the Earth normally takes the form of waves wandering around the planet, oscillating between the tropical and the Arctic regions. So when they swing up, these waves suck warm air from the tropics to Europe, Russia, or the US, and when they swing down, they do the same thing with cold air from the Arctic,” explains lead author Vladimir Petoukhov.

“What we found is that during several recent extreme weather events these planetary waves almost freeze in their tracks for weeks. So instead of bringing in cool air after having brought warm air in before, the heat just stays. In fact, we observe a strong amplification of the usually weak, slowly moving component of these waves,” says Petoukhov. Time is critical here: two or three days of 30 degrees Celsius are no problem, but twenty or more days lead to extreme heat stress. Since many ecosystems and cities are not adapted to this, prolonged hot periods can result in a high death toll, forest fires, and dramatic harvest losses.

Climate change caused by greenhouse-gas emissions from fossil-fuel burning does not mean uniform global warming – in the Arctic, the relative increase of temperatures, amplified by the loss of snow and ice, is higher than on average. This in turn reduces the temperature difference between the Arctic and, for example, Europe, yet temperature differences are a main driver of air flow. Additionally, continents generally warm and cool more readily than the oceans. “These two factors are crucial for the mechanism we detected,” says Petoukhov. “They result in an unnatural pattern of the mid-latitude air flow, so that for extended periods the slow synoptic waves get trapped.”

The authors of the study developed equations that describe the wave motions in the extra-tropical atmosphere and show under what conditions those waves can grind to a halt and get amplified. They tested their assumptions using standard daily weather data from the US National Centers for Environmental Prediction (NCEP). During recent periods in which several major weather extremes occurred, the trapping and strong amplification of particular waves – like “wave seven” (which has seven troughs and crests spanning the globe) – was indeed observed. The data show an increase in the occurrence of these specific atmospheric patterns, which is statistically significant at the 90 percent confidence level.

The central and eastern areas of the United States are especially prone to severe storms and thunderstorms that arise when strong updrafts combine with horizontal winds that become stronger at higher altitudes. This combination produces damaging horizontal and vertical winds and is a major source of weather-related casualties. In the warmer climate simulation there is a small class of the most extreme storms with both strong updrafts and strong horizontal winds at higher levels that occur more often, and thus the model suggests that the most violent severe storms and tornadoes may become more common with warming.

The prediction of stronger continental storms and more lightning in a warmer climate is a natural consequence of the tendency of land surfaces to warm more than oceans and for the freezing level to rise with warming to an altitude where lightning-producing updrafts are stronger. These features of global warming are common to all models, but this is the first climate model to explore the ramifications of the warming for thunderstorms.

300 mb Jet Stream at noon on the 20th of May about three hours before the tornado that hit Moore, Oklahoma:

James B. Elsner, an atmospheric scientist at Florida State University:

As with hurricanes, I think frequency needs to be separated from intensity.

Climate change increases the available energy for tornadoes through a warmer and moister atmosphere. Wind shear decreases in the global mean, but this might be irrelevant locally when the jet stream dives southward like it did last weekend across the Plains.

“I believe there is evidence that the strongest tornadoes are getting stronger. They are certainly getting longer and wider.” New York Times

“It’s not the right question to ask if this storm or that storm is due to global warming, or is it natural variability. Nowadays, there’s always an element of both.”

The Sublime of Superman, Man of Steel | ClimateState

[…] challenge to save “our” world from more extreme weather, and yes we have actually science to support the possibility for more intense tornadoes with climate warming. As one scientist put it in the after math of this year’s EF-5 Moore […]

The Sublime of Superman, ‘Man of Steel’ | ClimateState

[…] scene a super tornado wracks havoc, which demonstrates a force of nature and yes we actually have science who supports the possibility for more intense tornadoes with climate warming . As one Scientist put it in the after math of this year’s EF-5 Moore […]

> Trenbreth
(only noticed that one typo, one place)
-> Trenberth